During the early 1980s, the sport of triathlon was growing in popularity across the world and athletes living in the Northern Territory were also greatly interested in the swim, bike, run format.

The idea of conducting a triathlon in Darwin was first formally discussed by a group of interested people at a meeting November 1981.

The meeting lead to the establishment of a Local Organising Committee which appointed Brenton Hancock (YMCA) Race Director and resulted in the inaugural Darwin Triathlon being held from Mindil Beach on 10 July 1982. 54 athletes started with 48 finishing.

From 1983 to 1986 the Darwin Athletic Club organised four Darwin triathlons and a number of mini-triathlons from 1985 to 1989. Biathlons were organised for off-season triathlon training.

In 1987 the Darwin Triathlon came under the auspices of the Northern Territory Athletics Association.

Interest in triathlon was such that Darwin Triathlon Club (DTC) was officially incorporated in 1989 as was the peak body, then called the Triathlon Association of the Northern Territory (TANT).

The Club has grown strongly and its volunteers now conduct a year round calendar which includes triathlon, aquathlon and duathlon events. An active junior subcommittee looks after the triathletes of tomorrow and the enthusiasm displayed by our juniors & sub juniors guarantees the future of our sport. 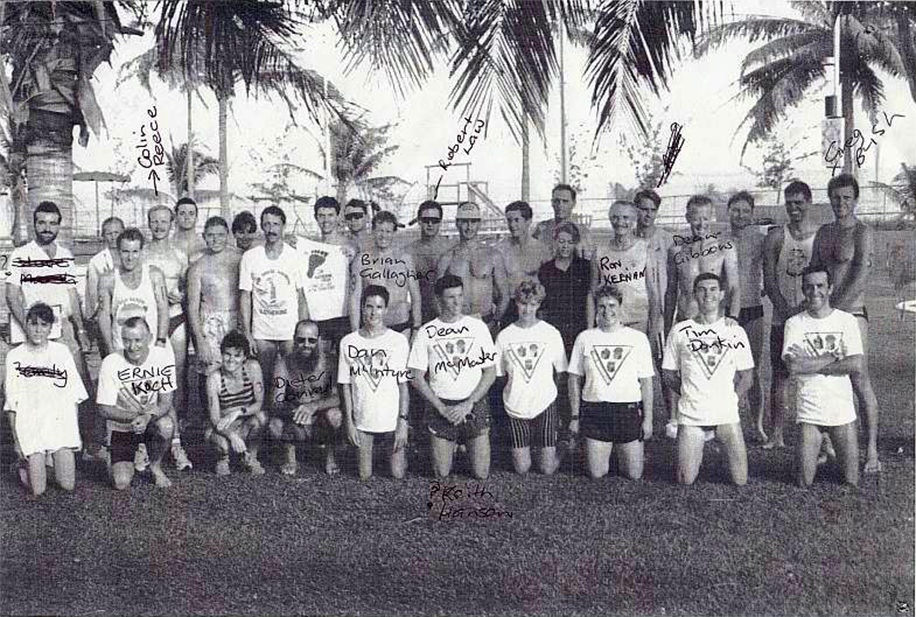 The late Kerran Mudgway was President of Darwin Triathlon Club during season 1998/1999 (at a time when we had very few takers for committee positions). He was a great supporter of our club events and loved the sport. He contributed to its growth and development in the Territory.

Sadly Kerran passed away on New Years Eve 2001. He had been working on renovations at his home and fell from a ladder which resulted in Kerran sustaining severe head injuries. His passing greatly shocked our close knit triathlon community. The Kerran Mudgway Memorial Club Championships commenced in 2002 as a fitting way to remember a wonderful person taken far to soon.

This Award was first presented in 2003 to recognise an outstanding performance of a member competing at Ironman Australia (at the time the only Ironman event in Australia). Taken into consideration are: The athlete’s overall finishing position within their category; their commitment and dedication; other facts relevant to their performance, including, without limitation, injury, illness, and personal circumstances.

Based on Ironman Australia results:

Dag of the Year

Volunteer of the Year (Beven Trophy)